Unfortunately, Nonjubulo found out she had chicken pox a day before the race and was devastated that she wouldn’t be able to compete.

“I am upset and angry but there is noth- ing I can do until my chicken pox heals, but I will still continue cycling and I have next year to compete in races,” Nonjubulo said, showing she is wise beyond her years.

“I am proud of myself and it means a lot to me as I put in a lot of effort in my preparations, so I believe I deserve the medal,” Patricia said. 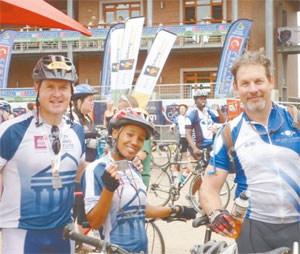 Thanks to Rob, Nkosi Haven has been introduced to Letabo Cycle Club based in Soweto and a cycle programme will be set up where ten bicycles will be sponsored for all the children of Nkosi Haven to ride.
“We are busy trying to source a container for the bikes to be stored in,” Rob said.
“I have definitely seen a change in both of the girls. They are role models to the rest of the children at the Haven,” Gail Johnson, the director and founder of Nkosi Haven said.
Gail told Patricia that she could ride the race in honour of Sindani, an infected mother of the Haven who was murdered three years ago, as she not only completed the 94.7 four years ago but also various marathons. Patri- cia and Nonjubulo will be keeping their bikes and I am sure over the December holidays will be riding up a storm.
Logging In...